Today is the United Nations designated International Women’s Day. Let’s take this opportunity to recognize that where governments have failed their citizens, obtaining and protecting water is women’s work.

The Women for Science section of the Inter-American Network of Academies of Science maintains an excellent Gender and Water page, providing links to relevant women’s professional networks, data, issues and case studies, training manuals, and other practical resources. Another great resource for women seeking to enter water science and engineering is the Association of Women in Water, Energy, and the Environment.

Men still dominate the engineering agencies and companies that make clean and convenient water a fact of daily life in wealthier nations, but it’s women who fetch and defend water for billions of others, especially in Africa, Latin America, and South Asia. This work demands immense strength and daily determination for the many who must trek long distances in the search for water free or pathogens and chemical contaminants, and resourcefulness for those who must clean their water to safeguard their children from illness.

Some international agencies and nonprofits are promoting innovative ideas like micro-finance “water credits” through female community leaders and individual mothers.

In many regions the right to water for life is threatened by the taking of water for profit, for resale or use in development. industrial processes, mining, energy extraction, and agribusiness. This is especially true when those struggling for drinking and sanitation water are poor or from marginalized indigenous communities. There women must demonstrate great physical courage to confront those powerful interests.

The struggle isn’t only a rural one. The world is rapidly urbanizing, straining municipal water systems and creating sprawling fringe shantytowns where no waterworks exist. Even in established cities in wealthier nations neglect and disastrous decisions have dangerously fouled water for some, especially in lower-income communities of color. The women of Flint, Michigan joined the Women’s March in Washington to demand clean water. The DeLoitte Review recently took on the topic in an academic article called, “Thirsty for Change: The untapped potential of women in urban water management.”

Water justice will be achieved only when women’s voices are heard inside board rooms and planning meetings. Women in water sciences are certainly making gains, and in industry and at the UN there’s a growing awareness that achievers should be honored. HarborLAB encourages young women to enter these disciplines and to apply for scholarships that might help them realize their goals, this Women’s Day and all days.

HarborLAB will commence its multicultural boatbuilding program in March with the International High School! We’re thrilled to serve these students, who are in an intensive college preparatory program for immigrant youth with limited English. IHS is housed within CUNY LaGuardia Community College.

We’ll make reed craft using invasive phragmites, which crowd out many of region’s indigenous estuary species. We’ll start with a demonstration inspired by the tankwa, an Ethiopian work boat made from papyrus on Lake Tana. Other models will follow, launching on June 8 for United Nations World Oceans Day. Our goal is for these boats to greet the arriving Hokule’a, a Hawaiian canoe circling the globe for environmental education. This is easily achievable at Gantry Plaza State Park, if permitted, directly facing the UN and a few minutes paddle from our launch.

We welcome volunteers to join the effort and donors to sponsor us!

Grass (family: Poaceae) and sedge (family: Cyperaceae) boats are among the most ubiquitous types because papyrus, bamboo, and reeds are renewable and readily available to those working the water as fishers, ferryers, and traders. Grasses and sedges also wonderfully pliable materials, providing both planking and twine. We’ll work with the United Nations community and immigrant cultural centers to maximize our inclusive service and multicultural representation.

This world heritage is truly ancient, as evidenced by petroglyphs depicting reed boats in Azerbaijan that date back 12,000 years. These boats quickly return to the soil, so archaeological evidence is spotty. Logic would indicate African origins. The earliest remains of a reed boat are 7,000 years old, unearthed in Kuwait. Palm fronds are also used in a similar fashion in the Persian Gulf. Even the story of Moses begins with him set afloat in a bulrush ark. The apexes of accomplishment in this art include ancient Egyptian papyrus voyaging vessels and the ornate craft of the living Uros culture of Lake Titicaca on the border of Peru and Bolivia. Our most famous reed heritage boat in North America is the tule (pronounced too-lee). Watch one get built in the video below!

On the East Coast, science writer and ecologist David Samuel Johnson proved the viability of phragmites boat construction. Even young students can build these boats.

Benefits of this project:

HarborLAB caused quite a stir recently by drawing attention to the fact that the U.S. Environmental Protection Agency isn’t testing plant tissues in the Newtown Creek. This great research gap had not been addressed before. We raised the point at the October meeting of the Newtown Creek Community Advisory Group with the EPA about Superfund progress.

Our concern is informed by our periodic biota surveys. We thank the United Nations Federal Credit Union and Con Ed for their support of our environmental work.

The EPA noted in its presentation that it tests the tissues of some fish species, especially those most likely to be eaten by people, but admitted in response to HarborLAB’s questioning that no plant tests were conducted or scheduled to be conducted. The EPA also asserted that because the creek was so thoroughly bulkheaded, there wasn’t a plant population to test. HarborLAB has conducted bioblitzes of the creek and strongly disagreed, suggesting that nonprofits and universities could begin plant tissue tests even if the EPA wouldn’t. Representatives from Riverkeeper, North Brooklyn Boat Club, and LaGuardia Community College quickly seconded HarborLAB’s concerns.

HarborLAB’s launch already boasts indigenous, salt-tolerant goldenrod, pokeberry, milkweed, and other species that support birds and pollinators. We’re working to add cordgrass, beach plum, and more as part of our GreenLaunch project. Marsh grasses, reeds, and other plants fringe the creek where there are no bulkheads or where bulkheads have crumbled. Above the bulkheads but still within occasional flood zones are a number of plant species, whether native, invasive, or cultivated. There are even fruit trees, including fig, apple, pear, and mulberry. Within the creek, HarborLAB has observed sea lettuce, bladderwrack, mosses, and more.

At the request of LaGuardia Community College biologist Sarah Durand, PhD, HarborLAB has been photographing shoreline and aquatic plants. Dr. Durand and her students have begun growing marsh grass in buckets and planters as experiments in anticipation of installing habitat restoration platforms. We will soon join the Newtown Creek CAG, which counts Dr. Durand as a steering committee member, in formally urging the EPA to reconsider its assessment and add plant tissue testing.

It’s absolutely necessary that the EPA expand testing to include plants and smaller animal organisms, like invertebrates and killifish who spend their entire lives in the creek. These are the complex organism building blocks this blighted corner of the estuary. As Newtown Creek Alliance Mitch Waxman remarked to HarborLAB after the meeting on the narrowness of the EPA’s work: “What the EPA is doing is a human health impact study, not an environmental impact study.”

Red algae species spotted at the bottom of the “steps” of the Waste water Treatment Plant nature walk. Also saw some planted Spartina there.

Green moss growing near the end of the Dutch Kills, one of the few green things growing so close to the water line.

Raise a glass of water in a toast to water! Remember to drink local tap water, and strive to protect and improve that blessing for future generations.

We’re endowed with water riches in New York City, so please take the chance to celebrate World Water Day by supporting the UN’s efforts to help people who must struggle for the most basic necessity. “Like” the official UN World Water Day fan page Facebook to keep up with water education, resources, and fun all year.

For those wishing to more intensively study water issues, we recommend the powerful local brain trust of the Columbia Water Center.

Spring rains and snowmelt are filling the Neversink Reservoir, where HarborLAB will pioneer public paddling programs this summer! We’re very grateful to the NYC Department of Environmental Protection and Catskill Watershed Corporation for this opportunity to serve. We also give great thanks to our sponsor, the UN Federal Credit Union, for its generous sponsorship of HarborLAB! 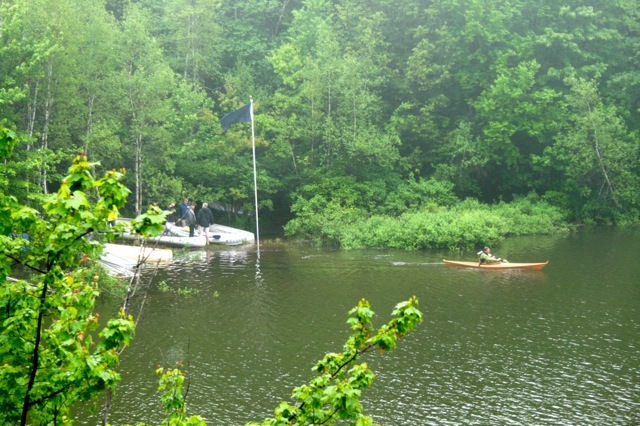 Today is the United Nations’ awareness raising World Oceans Day. It seems proper today to consider one of the greatest threats facing marine ecosystems across the planet. This Natural Resources Defense Council video is an excellent introduction to the issue.

HarborLAB is thrilled to announce on 2013 World Environment Day, and just in time for World Oceans Day, that the United Nations Federal Credit Union has sponsored our purchase of estuary learning gear! HarborLAB will enhance its paddling programs with handheld and stationary video microscopes, waterproof cameras, waders, seines and traps, organism models, educational guides, and other materials thanks to the United Nations Federal Credit Union. (UNFCU).. City University of New York faculty, who sit on HarborLAB’s Board, will select these purchases along with advisers and Executive Director Erik Baard, who was the UNFCU 2012 World Environment Day keynote speaker. 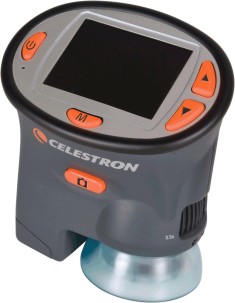 Celestron handheld video microscope. An example of the type of gear we will use.

HarborLAB will debut some of this learning gear at the Clearwater Festival, where it will be the sole provider of “walk-up” paddling programs. HarborLAB will make the UNFCU-sponsored items available to the Environmental Science program of CUNY LaGuardia Community College to maximize their educational value throughout the year, and so that CUNY students are best trained to serve with us as estuary and watershed ecology docents and rising leaders.

Long Island City, NY-headquartered UNFCU is a member-owned, not-for-profit cooperative institution that serves the financial needs of the United Nations staff, UN Specialized Agencies, former international civil servants, and their families globally. It has members located in more than 200 countries and territories, and summarizes its mission as “Serving the People Who Serve the World.” Both HarborLAB and UNFCU are members of LIC Partnership.

HarborLAB is deeply grateful that UNFCU’s sponsorship is allowing us to ignite a love of environmental science in the young people we serve. For a glimpse of this kind of gear in action, here’s Erik Baard’s brief video of the New York Restoration Project‘s environmental education program seining in the Harlem River:

UNFCU joins Con Ed and TF Cornerstone as top tier financial sponsors of HarborLAB. Tax deductible donations are made through HarborLAB’s 501(c)(3) fiscal agent, Earth Day New York, to which we’re grateful for this service. HarborLAB is currently seeking a $5,000 sponsor for a Trailex UT-1200-16-04 boat trailer and related insurance to better enable its programs for youth throughout the NYC metropolitan region. Please email support@harborlab.org with your interest.