A weekly entry about the life of our estuary and watershed.
(Our apologies for the delayed publication.) 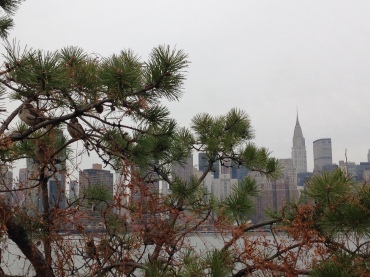 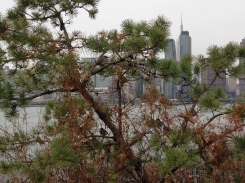 Pine seed. Photo and labeling by University of Miami: http://www.bio.miami.edu/dana/dox/altgen.html

Et voilà! The seeds with their feathery pods slip out! Pour seeds into a sealed bag. Return cones to pot, shake. Repeat several times to get as many seeds as possible.

Pop! You can hear them opening in tiny pops. Transfer to a lidded pot and shakes very vigorously. Remove cones into second pot.

Pine cones on a broiler tray. They start as sealed as Fort Knox but when you bake them at 200 degrees Fahrenheit for 10-20 minutes… 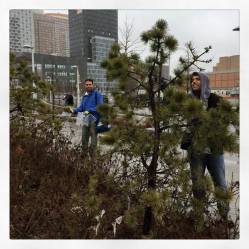 Photos and text by Erik Baard

Pitch Pine (Pinus rigida) is a hardy little tree that’s native to the eastern US and coastal from the Chesapeake Bay to Acadia National Park, Maine. They thrive in a variety of harsh conditions from poor alpine scratch to low swamps. They protect dunes, stabilize shores, and feed birds and insects. These crooked and twisted trees are rarely used for lumber, but as you can imagine, they were in great demand for the resin pitch.

Physicists are fascinated by how a drop of room temperature pitch can be shattered by a hammer blow yet is experimentally shown to be a liquid (unlike ice, which is a true crystalline solid). The hardness and consistency of pitch, which is also malleable when heated, makes it extremely useful for preserving and waterproofing ships, railroad ties, and mine shaft supports. It’s also used to flavor wine, and sometimes medicinally. Outdoor enthusiasts often use pitch for lamps and torches, glue and wound binding, or even to make natural plastic widgets! Now research labs are following suit.

These trees are very well protected against fire by their specialized bark. In a worst case scenario, even a stump can spring to life with new branches. Their cones also pop open when exposed to intense heat, so they not only endure the flames but help regenerate the ecosystem.

In our region, you can enjoy pitch pine forests in the New Jersey Pine Barrens, Fire Island, and Long Island’s East End. But NYC parks have stands of them too,  including Hunters Point South Park just blocks away from HarborLAB. We’ll grow seeds gathered there at the HarborLAB GreenLaunch!

HarborLAB makes pitch pine seedballs to benefit our entire harbor. We’ve gathered cones with students and volunteers with Baruch College, New Jersey Institute of Technology, National Iranian-American Council, and Hunters Point Parks Conservancy. We learned our seed ball making technique from Seedball NYC, and how to get seeds from pine cones (by baking them) from the Greenbelt Native Plant Center of the NYC Department of Parks and Recreation’s Natural Resources Group. 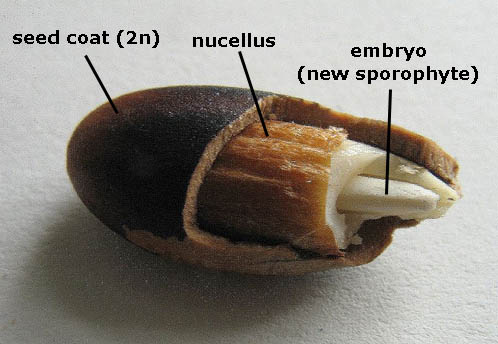 Pine seed. Photo and labeling by University of Miami: http://www.bio.miami.edu/dana/dox/altgen.html 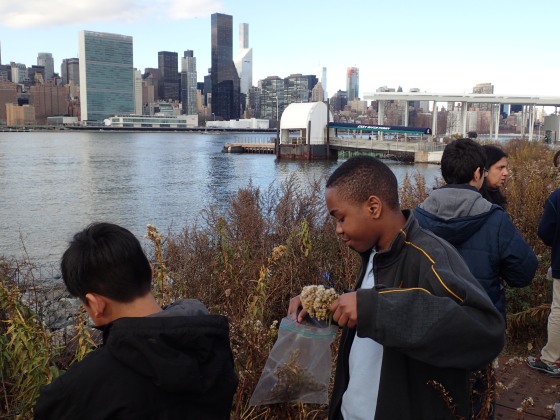 HarborLAB volunteers had a wonderful day gathering seeds in Hunters Point South Park with a Hunters Point Community Middle School science class. We conceived and operate our seed program as a means of restoring and strengthening estuary habitat. We’re advised by local conservation groups and agencies, and in our field work we partner with school groups, corporate volunteer teams, and residents.

We’ve partnered with HPCMS since before it even opened its doors. The school has an ecological focus and serves special needs students, like our seed gathering partners, along with those in the mainstream. The student population is very diverse and most come from lower-income families.

Mary Mathai’s students met us in the park across from the school on a mild and partly sunny December afternoon. The weather has been so warm that many flowers have yet to slip into seed-heavy dormancy. We focused on a thicket of seaside goldenrod (Solidago sempervirens) which fortunately had largely turned over to fuzzy seed. We’ll return to the school to make seed balls with our day’s collection, and plant them along shorelines throughout our estuary as we paddle in 2016.

On the way to our goldenrod quarry we visited beach rose, pitch pine, and what are commonly called North American asters. Beach rose (Rosa ragusa) isn’t native, and is categorized as invasive along much of the East Coast. But in Hunters Point South it’s decoratively planted. The rose hips provided a great chance to talk about nutrition (especially vitamin C) and seed distribution by endozoochory (dispersal by animal ingestion and defecation). Pitch pine (Pinus rigida) is a tough native tree with twisting branches. It grows in poor soil and forms the core of the famed New Jersey Pine Barrens. This species allowed us to talk about forest regeneration through fire because this tree tenaciously regrows after damage and its cones pop open to released winged seeds after being exposed to high heat. Because of our region’s record high temperatures this autumn, many flowers were North American asters were determined in 1994 to not be true asters at all, but  were instead categorized under the genus Symphyotrichum. The new genus is still under a family named for the asters, Asteraceae, along with daisies, sunflowers, and many other important flowers.

Many thanks to volunteers Patricia Erickson, Diana Szatkowski, and Erik Baard. Deep gratitude also to Hunters Point Community Middle School science teacher Mary Mathai and Principal Sarah Goodman, and to NYC Department of Parks and Recreation western Queens park manager Norman Chan for access and to the Natural Resources Group of the department for guidance.

Count goldenrod among the Asteraceae too! Goldenrod has long been recognized as a medicinal plant and recently urban planners have appreciated its ability to stabilize shorelines and dunes. Goldenrod is important to many animals. It feeds butterflies and bees, and hosts host the Goldenrod crab spider (Misumena vatia), which can change color to camouflage itself against its insect prey. Goldenrod also shelters the nests of black skimmers, one of our region’s most fascinatingly adapted shorebirds. The kids quickly grasped how the puffy seed heads acted as parachutes or sails to help carry the plants’ next generation far away. No need to worry about this goldenrod stand being diminished — these are perennials  and we left many seeds at the site to boot. 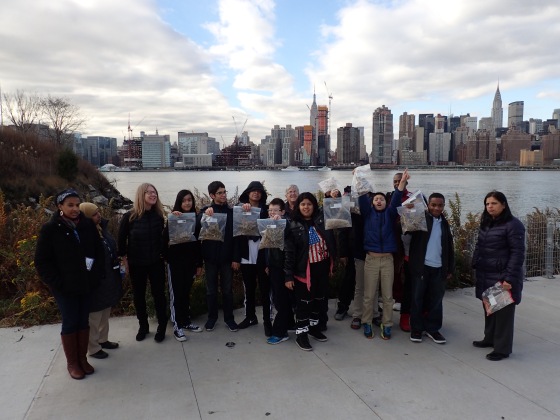 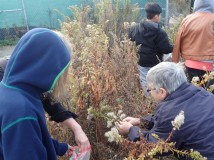 HarborLAB Facilities Manager Patricia Erickson shows students how to gather seeds without scattering them to the wind. 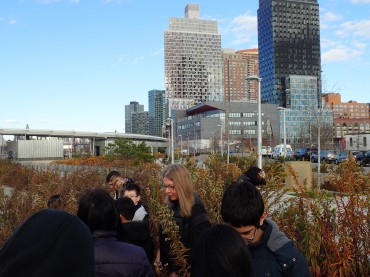