In Southeast Asia many bombs and bomber fuel tanks from the war decades ago have been converted into other uses, including boats. Photo by Carter Emmart.

Carter Emmart leads Grand Tours of the Universe as Director of Astrovisualizarion at the American Museum of Natural History, but spends much of his private time in one of his favorite places on Earth, Southeast Asia. It’s in Laos that he recently photographed an example of one of the most remarkable boat types in the world. At first glance it looks like yet another dugout canoe, a tree felled to ferry fruits to market or delicately balanced bicyclists across slow and silty rivers. But no, this is a cluster bomb case or jettisoned bomber fuel tank rebirthed in peace.

As Carter writes, “In Luang Prabang, Laos, the Royal City on the Mekong, now a UNESCO World Heritage center, there are many bomb casings and spent fuel tanks which were dropped by planes during the war. Fortunately this place was protected from the bombing, but a huge air field northeast of town (where one flies in) was the center of a lot of activity during the war in the ’60s until ’75, when the Communists finally took over. We saw bomb or fuel tank boats up the Ou River five years ago, but didn’t get a picture.”

Other travelers to Laos have reported seeing bomb casings and other war hardware repurposed with minimal modification as hut stilts, planters, grain cannisters, small cisterns, mugs, buckets, and other peaceful implements. Carter saw a bomb tail used as a potted plant holder in a Buddhist cave shrine at Mount Phousi, Luang Prabang, Laos. One must admire the resilience and innovativeness of a people who can co-exist with, and even utilize, these mementos of trauma. “Swords into ploughshares” or “bombs into boats,” it’s all the same. War is hell, peace is beauty. And peace is productive.

Pete Seeger might have loved seeing one of these canoes, which symbolically captures so much of his teaching, at the Clearwater Festival. HarborLAB provides the canoe and kayak program to the festival. Perhaps in a future year, HarborLAB will have the means to bring a “bomb boat” over? Or imagine a boat like this plying our nation’s waterways, paddled by people representing different local peace groups?

In the meantime, when someone asks you if you’ve got a “bombproof roll,” you might reply, “Maybe, but can you roll a bomb?”

Boats from bombs, Click the photo for the Away Go We blog.

Wonderful news! Thanks to our volunteers’ fantastic service last year, the two largest annual water ecology festivals in the metropolitan area have asked HarborLAB back to provide their public programs in 2014! Join us in Croton Point State Park in the Hudson River Valley for the Clearwater Festival on June 21 and June 22 and on Governors Island in the center of our harbor for City of Water Day on July 12!

January isn’t quite over and already HarborLAB’s 2014 season is filling up! We’re having trouble with our Google Calendar, so please keep on top of opportunities to volunteer and paddle through our Facebook events page:

Students and environmental volunteers have priority seating on our public trips, but we arrange special events too. Please let us know how and when we might help your service organization extend its mission onto the water, or let’s brainstorm together!

On many days HarborLAB will organize “Partner Paddles,” which are special events for schools, universities, researchers and artists, environmentalists, and other service groups. For example, in 2013 we had special events for the Hunter’s Point Community Middle School, CUNY Baruch College, CUNY LaGuardia Community College, Hour Children, Billion Oyster Project, NYC DEP and its upstate watershed exhibitors, and others serving the common good. To avoid confusion, these events won’t be posted on our public calendars and event lists, but we’ll post photo galleries and trip reports afterward.

HarborLAB must also devote considerable attention to improving its waterfront space and launch, and conducting environmental science research there. Energetic volunteer recruitment and fundraising for boats and materials will increase our ability to produce simultaneous programs. Exciting times ahead!

Here are a few events to get you dreaming of summer! 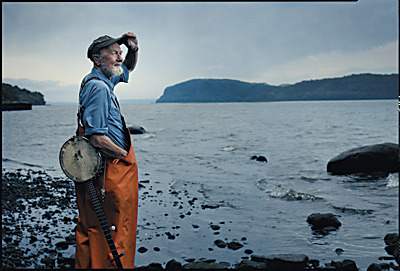 Pete Seeger, who gave so much to peace, rests in peace. Our mourning is exceeded only by our love and gratitude.

Our hearts are with the Seeger family and friends at the Clearwater organization who carry forward his work. We will lovingly serve the Clearwater Festival again this year, on the Hudson River he did so much to clean, with a public paddling program and education table.