Calling all educators, campers, and community groups to join us and the Metropolitan Waterfront Alliance on July 12 for the 2014 Cardboard Kayak Race! Everyone comes by boat to Governors Island for City of Water Day, but only the most creative and humorous mariners make their own zany boats right at the festival. Let your team of kids be among them!

HarborLAB will be providing public paddling programs at City of Water Day and safety support for the cardboard kayak race, as we did last year. We would be happy to help teams of junior high, high school, and college students practice their paddling in the weeks before competing in this unique design-build-paddle event! We and the MWA can also connect you with swim instruction organizations.

For information and registration, please click HERE. To partner with HarborLAB, email edu@harborlab.org. 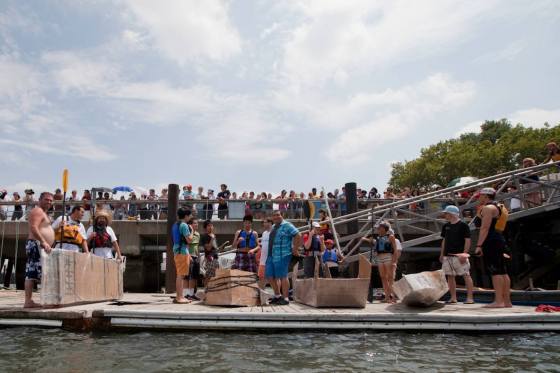 This year the City of Water Day gathering on Governors Island featured the inaugural cardboard kayak race — a bit of lunacy that drew an enormous flood of spectators to the Pier 101 basin. HarborLAB provided paddles and life vests to the contestants and safety kayaks should anyone have needed rescuing.

The competition was organized into several rounds — or, appropriately for the scorching day, “heats” — past a buoy across the embayment, culminating in a mad dash for the medal. Designs ranged from efficient to fanciful. One North Brooklyn Boat Club entry looked like a Balangay, while another was ready to join the New York Water Taxi fleet. A few sank, though the prize for tenacity had to go to North Brooklyn Boat Club for recovering from a keel-over collision in Heat 2 to complete its buoy circuit. Erik Baard pulled the soggy canopy from their boat and carried it on a HarborLAB safety Ocean Kayak Malibu 2 XL for the duration of the heats.

In the end, triumph went to Stevens Institute of Technology engineering students whose sleek and sturdy boat reflected weeks of planning. It seemed they could have paddled back to New Jersey in that thing!

All hail the taxi! Photo by Scott Sternbach. 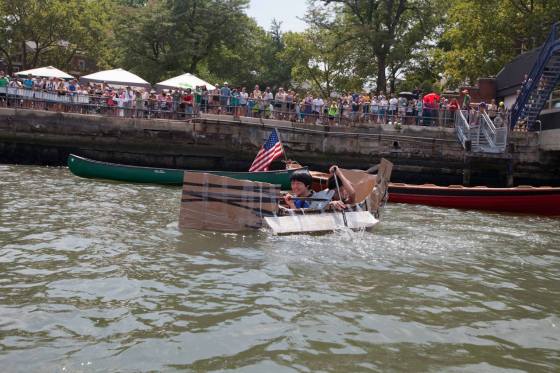 A team from Stuyvesant Cove ran a strong second before sinking. They sportingly swam their craft in. Photo by Scott Sternbach.

The go-go Greenpointers of the North Brooklyn Boat Club who impressed us all with determination and filled us with envy that they got to take a swim. Photo by Scott Sternbach. 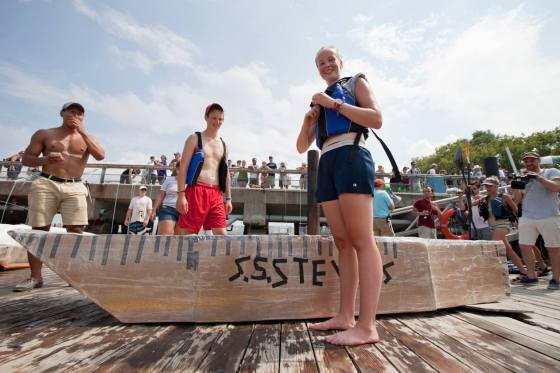 To the victors go the As. Stevens Institute of Technology students with their winning cardboard kayak. Photo by Scott Sternbach.