Erik Baard at Hallets Cove in 2015. Photo by NYCDEP for HarborLAB.

The East River has so far rolled through this winter unadorned by a white speckling of sea ice (photos here are from 2015). On the Hudson River, bald eagles and seals have no ice floes to ride from the foot of the Palisades to the skyline. HarborLAB volunteer Thomas Dieter, director of CUNY Start at LaGuardia Community College, relays his observations from his home in Hunters Point South:

“We haven’t spotted ice yet this winter, and at this point I’m guessing we won’t. From our apartment at Hunters Point South Park, we can see that the inlets and coves just north of Newtown Creek haven’t iced over. In the past, the inlet where the ferry docks and the cove south of the fishing pier iced over at some point–but no such luck so far this year that we could see…The water in these areas doesn’t move as quickly as the river, and it’s far shallower, so I expected ice to collect there again this January and February.”

Our local disappointment echoes the vanishing polar sea ice aspect of the global climate change crisis, though some seek to take advantage of it for undersea fuel extraction, military maneuvers, and shipping. The National Oceanic and Atmospheric Administration’s Arctic Report Card on sea ice, glaciers, snow cover, temperatures, indigenous cultures, and animal health is profoundly grim. A special concern is ocean acidification in the Arctic, which is undermining the regional ecosystem’s less diverse food chain.
A
A
Scientific American/Climate Central report that winter sea ice at both poles has retreated to record lows. This is a sharp reversal from a record Antarctic peak last year, but a continuation of a trend of historic lows in the Arctic. Ice sheets ashore — notably in Greenland — are shrinking and thinning too. Winter heat waves are lashing the Arctic as warm air pushes north. 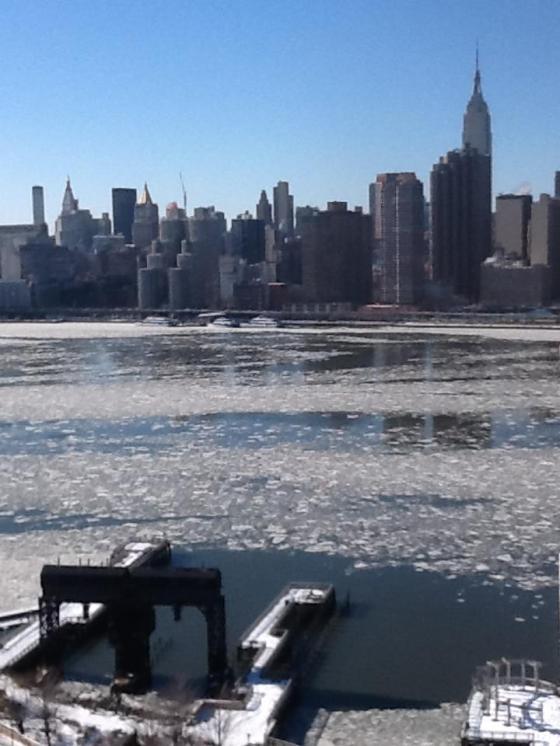