HarborLAB teamed up with the Hunters Point Community Middle School, the Environmental Cooperation Organization of CUNY Baruch College, and Lamar Outdoors to deliver a message in support the People’s Climate March on Sunday, September 21. Our goal was simple:  to display a “350” banner in the water with the United Nations as a backdrop. Our civilization grew in an atmosphere that was composed of 275 parts per million of carbon dioxide. Because we’ve been burning so much carbon-loaded fossil fuel, currently we’re over 400ppm. The attendant consequences of releasing CO2, which traps heat, are ocean warming and acidification, sea level rise, chaotic weather patterns, air temperature rises, and the loss of whole species and ecosystems. NASA atmospheric scientists calculated that our best hope for the future is to quickly reduce the CO2 content of our air below 350 parts per million.

The banner was conceived by Erik Baard of HarborLAB and painted by Hunters Point Community Middle School students under the direction of art teacher and environmentalist Lucinda Kalin. The banner was the back of a used billboard advertisement donated by Lamar Outdoors. HarborLAB will permanently display the banner at its site for viewing by those crossing the Pulaski Bridge. The floats will be reused as safety perimeter lines.

Security concerns are high in the East River while world leaders are visiting the UN. Indeed, HarborLAB heard over its marine radios how divers were swimming beneath the waterline at the UN to check for bombs. Despite this heightened alert, the US Coast Guard and New York Police Department’s Harbor Unit were extraordinarily courteous and supportive of our effort, escorting us from the Newtown Creek to Gantry Plaza State Park. Within the cove of the park, we unfurled the banner for the public to view and take a moment to think about what’s at stake in the UN Climate Summit and in our daily decisions.

Many thanks to those who helped!

The United Nations Federal Credit Union supports HarborLAB with annual grants. So does TF Cornerstone, whose residents could see the banner from their windows, and Con Ed, which has made energy efficiency a core mission.
A
HarborLAB volunteers conceived the idea, inspired by Bill McKibben (who paddled with us earlier), and the simplicity and necessity of the 350 message.
A
Hunters Point Community Middle School painted the banner in a very readable way, on of the back of a used vinyl billboard ad donated by Lamar Outdoors.
A
Baruch College student-led ECO (Environmental Cooperation Organization) provided the HarborLAB team to display the banner by kayak.
A
Ron Kleiman, a member of the National Canoe Safety Patrol and a retired banner maker, led the banner float preparation and provided expert kayak safety assistance.
A
The US Coast Guard reviewed and discussed plans with us in a very friendly and supportive way.
A
The NYPD Harbor Unit continued this spirit of friendliness and help, going so far as to provide a very patient and professional safety escort.
A A
Metropolitan Waterfront Alliance worked with NY State Office of Parks, Recreation, and Historic Preservation to welcome paddling into Gantry Plaza State Park.
A 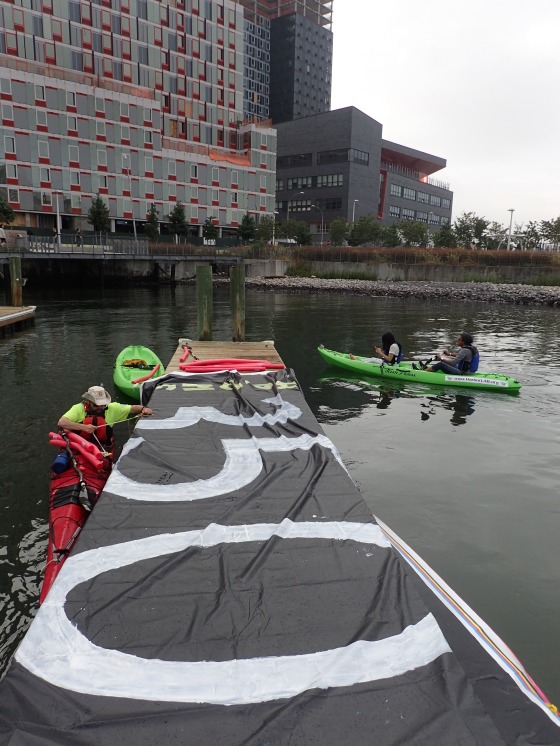 Ron Kleinman helping to pack away the banner and its floats. Hunters Point Community Middle School is the grey building at right in the background.