There might be a Belted Kingfisher burrow in the earthen face of Hunters Points, where it drops into the East River and Newtown Creek mouth. HarborLAB spotted one last weekend while paddling with a group of CUNY Baruch College students from the Environmental Cooperation Organization. These beautiful, fish-eating, shallow diving birds typically nest 3′ to 6′ into a steep bank like that of Hunters Point, but can go as deep as 15′. They’re not often seen in these parts. It’s worth investigating whether development will be destroying its habitat, or if the coming park will restore slopes for this and other burrowing birds. It’s also very possible that this fellow was migrating south, given the season, and another sighting on the Bronx River just days before.

Looking carefully at these two photos (click to enlarge), you can see the bird on a bare branch overhanging the water.

Okay, that distant silhouette has got to be a bit frustrating. Here’s a closer view of another of the species, on the Bronx River, taken by Charles Berenguer, Jr. at about the same time. Notice the beautiful composition. 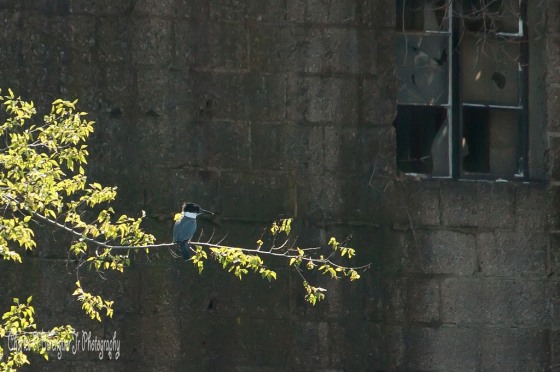 Still not satisfied? Here’s a closeup from the Cornell ornithology page. Note that coloring varies from blue to slate to near black. Females have more red banding beneath and, according to some sources, are slightly larger.

Interestingly, the species prefers riffles, according to the U.S. Environmental Protection Agency. We lack those here, but perhaps the shallows and light turbulence of tidal currents passing through areas of rip rap rock, such as those that foot Hunters Point, might simulate it?