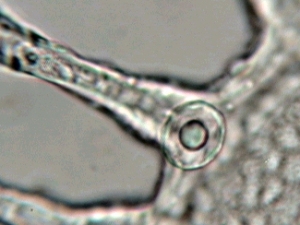 It was a scientific triumph last spring when an instrument at the South Pole apparently detected gravity waves emanating from the Big Bang. But what instrument is this pictured above, that detects gravity beneath the waves?

When the Benjamin Franklin and John Adams truce party crossed over the beach to meet British Admiral Richard Howe at a Staten Island estate, they may have stepped on glacially transported pebbles that held Favositid fossils from hundreds of millions of years ago. These honeycomb corals grew between roughly 300 million – 500 million years ago. The peace talks were doomed to failure, but perhaps they might have less agitated to revolution if they’d found this souvenir. After all, doesn’t it put the rush of human desires into perspective? Instead, this fossil was left to American Museum of Natural History paleontologist Carl Mehling to find at the estate, now the Conference House park, during his remarkable (and successful) quest to find fossils in all five boroughs in one year.