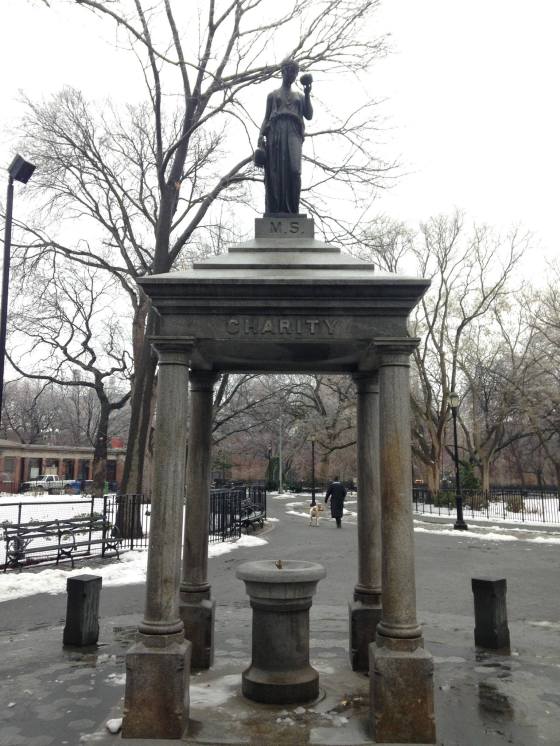 I was recently wandering through the slush of Tompkins Square Park for a vegan cherry pie when I chanced upon a fountain west of the dog run. It was topped by post and lintels, four austere friezes each bearing what I immediately recognized as Victorian Era feminine virtues: Hope. Faith. Charity. Temperance.

Temperance? That tipped me off. This fountain was a bit of gentle 19th century civic persuasion to not surrender to the animal spirits loosed by alcohol. Let cool, clean waters heal you.

This Temperance Fountain stands at the heart of what was once the “Little Germany” neighborhood. Stereotypes about the “idleness, imposture, [and] crime” of 19th century Irish and German immigrants panicked the upper crust of New York City society, who associated the immigrants’ supposed failings with drunkenness. A repugnant Nativism and religious bigotry arose, often linked to suspicions that Catholics were loyal to the Papacy and not America. Legislative measures to encourage teetotalism infamously culminated in Prohibition’s gang wars. A few sympathetic (albeit perhaps equally prejudiced) Progressive clerics and women of means strove to uplift the new, alien masses by providing an alternative to booze: reliable drinking water.

Generations of New Yorkers since Dutch colonization of Manahatta had fouled the potable springs and ponds at their feet with garbage and sewage, and so instead drank cider, beer, and hard liquor mixed with water. Immigrants participated in this pollution, and the loss of fresh, local water was a living memory for established New Yorkers in the mid-19th century.

Temperance societies — often affiliated with enlightened causes like Women’s Suffrage — grew through the latter part of that century. The activist women and philanthropists like Henry D. Cogswell (dentist to the California Gold Rush) funded Temperance Fountains, often topped with statues depicting Charity. Today few remain,  though another is in nearby Union Square Park. Another, in Washington, DC, bears the same inscription of virtues as the one in Tompkins Square Park. According to the Washington Post, a California Senator once derided the fountain as that city’s “ugliest statue.”

But in a sense, you drink from a Temperance Faucet at home every day. The temperance movement, alongside disastrous fires and a cholera epidemic, was instrumental in the creation of NYC’s world renowned waterworks. The completion of the Croton Reservoir Aqueduct in 1842 made the our city’s first such fountains possible, and continued lobbying by temperance groups helped NYC stretch its water projects into upstate mountains.Maybe the teetotalers  had a point, if not a pint: the Catskill town of Neversink, where HarborLAB’s reservoir paddling program is located, just ended Prohibition in 2015.