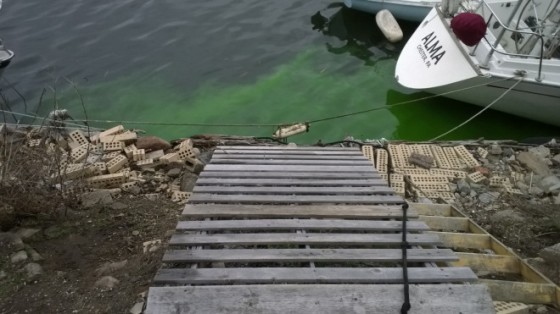 The last of the undigested food coloring remaining from St. Patrick’s Day celebrations entered the estuary this morning due to steady rain that started over 24 hours ago. HarborLAB volunteers spotted a bright Kelly green streak hugging the Newtown Creek’s north bank this morning and phoned in reports:

“It’s not unusual to receive reports of bright green water on April 1,” said Robert Trondheim, head of Estuary Research at the NYC Department of Environmental Monitoring. “We’ve observed a sequence. Green beer shows up within hours, from both vomit and what races through people’s systems. A few days later we’ll get the food coloring from green bagels and Shamrock Shakes, cookies and cakes. Sugary treats. What we’ve got now are green releases from things that are slower to move through the bowels and therefore potentially subject to much later combined sewer overflows when it rains. These are things like green eggs and ham,” he explained.

Specifically addressing green eggs and ham, Trondheim added,  “Because of scientists’ health and environmental warnings about meat, I could not, would not on a boat…and will not eat them in the rain.”

Green fluorescent dyes that look eerily similar to this morning’s release are used to detect leaks in the sewer system. Such flow tracers indicate the locations of system faults and can be used to measure their severity even in the darkness of a sewer pipe. By coincidence, it’s become an annual tradition in Chicago to release green dye each St. Patrick’s Day.

Because Newtown Creek can turn green due to algal blooms and chemical spills, HarborLAB encourages you to report all unusual water conditions. And enjoy your green bagels and April Fools Day in true New York City fashion!