“The waves broke and spread their waters swiftly over the shore. One after another they massed themselves and fell; the spray tossed itself back with the energy of their fall. The waves were steeped deep-blue save for a pattern of diamond-pointed light on their backs which rippled as the backs of great horses ripple with muscles as they move. The waves fell; withdrew and fell again, like the thud of a great beast stamping.”

March has been a big month for waves. Last week the UN World Meteorological Organization added a new entry to its Cloud Atlas, and it’s a doozy: the beautiful undulatus asperitas, meaning “agitated waves.” Rippling like belly dancing Empress Theodora, perhaps no phenomenon more powerfully reminds us that air is just another fluid riding atop denser water. At the same time, University of Miami report that “massive rogue waves aren’t as rare as previously thought.”

Undulatus asperitas occurs when upwelling meets cross current through cloud cover, usually in the quiet hours after thunderstorms. The new recognition last week on World Meteorological Day  comes thanks to grassroots activism by the Cloud Appreciation Society. Of course other forms of atmospheric waves have long been studied, on Earth and elsewhere. On Venus one massive, pole-to-pole bow-shaped wave has scientists fascinated.

Even the largest, steepest solitary wave recorded on our world are puny in comparison, but are the stuff of mariners’ nightmares. For example, the so-called Andrea Wave of 2007 was 100 meters wide, 21 meters tall, and raced across the North Sea between Scotland and Norway at 64 kilometers per hour. Imagine the Marriott Marquis billboard barreling from its Time’s Square home to Pouqukeepsie in an hour. Now University of Miami and Norwegian Meteorological Institute researches say they’re more common than realized. 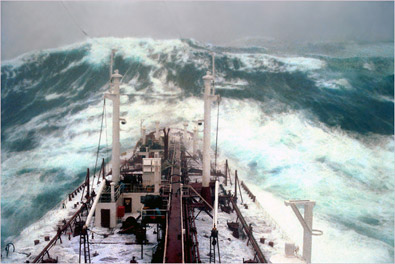 The good news is that scientists are bettering our understanding of how rogue waves form, and so how we might avoid them. Researchers from Georgia Institute of Technology, University College Dublin, and the Institut FEMTO-ST CNRS-Université de Franche-Comté found that even these messy, briny behemoths share much in common with tiny optical wave packets.