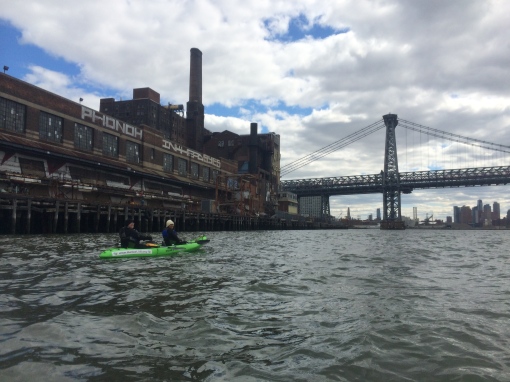 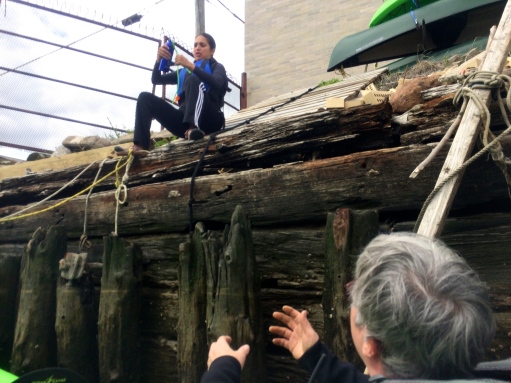 Volunteer Sally Attia, Esq. preparing for our paddle by making sure our water bottles were packed

On Sunday April 27, 2014, three of our HarborLAB volunteers- Facilities Manager Patricia Erickson, volunteer Sally Attia, Esq. (part of our incorporation team), and yours truly, Operations Manager EJ Lee kicked off the 2014 year with a paddle from our Newtown Creek launch to Williamsburg. 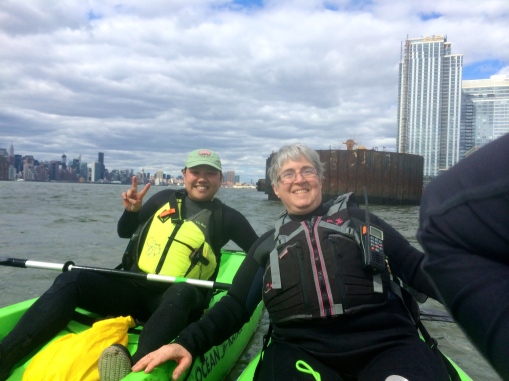 The purpose of this paddle was to scout the shoreline for any changes since last year that could affect paddlers. I am happy to report that there was nothing that would disturb paddling on the East River from Long Island City to Williamsburg, Brooklyn.

Cormorant on an old piling by the Huxley Envelope building in Greenpoint, Brooklyn

In fact, the cormorants were sunning themselves contentedly, Canada geese were floating along with their goslings, and the bladderwrack were flourishing on the rocks along the banks of the Newtown Creek and Bushwick Inlet.

Operations Manager EJ Lee watches the Canada geese fly from the Bushwick Inlet, whose banks are covered in Bladderwrack

HarborLAB will be offering longer open water paddling to the public in Mid-June, because of safety concerns due to exposure to cold water. The temperature of the East River on Sunday was 47ºF, and full length wetsuits are absolutely necessary.

Fellow paddlers out on the East River in their sea kayaks

Although we had favorable currents, there were barges and ferries on the river, and the wind was a-blowing. We learned very well that it was the first paddle of the year; our sore muscles made sure we knew the next day! As always, paddle safe and paddle smart.

Pat and Sally warming up in the car after the paddle

Calling all educators, campers, and community groups to join us and the Metropolitan Waterfront Alliance on July 12 for the 2014 Cardboard Kayak Race! Everyone comes by boat to Governors Island for City of Water Day, but only the most creative and humorous mariners make their own zany boats right at the festival. Let your team of kids be among them!

HarborLAB will be providing public paddling programs at City of Water Day and safety support for the cardboard kayak race, as we did last year. We would be happy to help teams of junior high, high school, and college students practice their paddling in the weeks before competing in this unique design-build-paddle event! We and the MWA can also connect you with swim instruction organizations.

For information and registration, please click HERE. To partner with HarborLAB, email edu@harborlab.org.

Intrigued by these images? Then head over to our Facebook Fan Page (https://www.facebook.com/HarborLAB) to enjoy the challenge of our Saturday Science Stumper! Each week we present an image that relates to our estuary and watershed ecosystems, plus a hint to help you identify it. The following week, we provide the caption.

HarborLAB is an environmental service learning organization, not a club, so we’ll shamelessly geek out on the wonders of science around us. Join the fun! 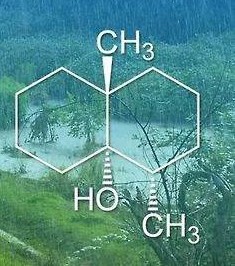 The Metropolitan Waterfront Alliance is our region’s most dynamic and effective advocate for reviving the economic and ecological potential of our waterways. This inclusive network promotes waterborne transportation for commuters and cargo, while also supporting habitat restoration and sustainable recreation, like paddling. The MWA’s Waterfront Action Agenda synthesizes this comprehensive vision and outlines achievable goals. This five-point program grew out of work by the MWA’s urban planning staff and from ideas that bubbled up from the hundreds of harbor stakeholders that the MWA brings together.

If you want your organization to be part of this community, sign up here to join the MWA and benefit from conferences, events, seminars, community meetings, workshops, calls to action, and Waterwire newsletter.

Please let your elected officials know you support the Waterfront Action Agenda. Not sure who represents you? The League of Women Voters’ online district locator will guide you. No need to know your nearest buoy, just punch in your zip code! 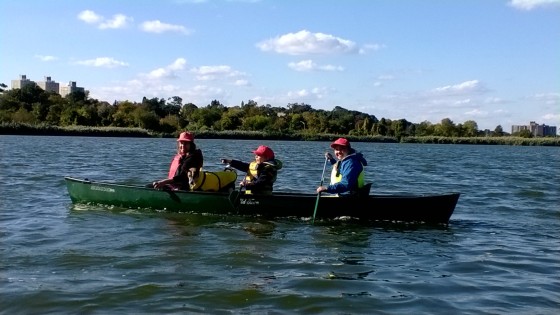 Starting in June we’ll offer paddling the first Sunday of each month. We offer both Partner Paddles to augment the missions of schools and community organizations, and Community Paddles for the general public to enjoy during open program hours.

We’re deeply grateful to the Flushing Meadows-Corona Park Conservancy for its advocacy for this premier green space, and for aiding HarborLAB with permits and outreach. The organization’s leadership is reflected in the naming of Pat Dolan Trail for its first president.

Our goal is to through demonstrations seed a local eco-educational, non-competitive paddling, and nature stewardship group at Willow Lake and Flushing World’s Fair Marina’s kayak launch. For those looking to paddle race or row, try these two great nearby groups: New York Dragon Boat Race Club or Row New York!

The Willow Lake habitat restoration in Flushing Meadows-Corona Park was closed to the public for a long stretch while the NYC Department of Parks and Recreation restored and replenished natural areas. We’re excited by the improvements and hope to contribute to further progress through water and sediment testing, new plantings of native species, and mitigation and remediation of highway runoff waters. Paddling provides unique views of the herons, egrets, turtles, and other beauties of Willow Lake. At a later date we’ll write about the history of Willow Lake and its larger twin, Meadow Lake, and proposals for the future of the greater Flushing Creek watershed.

Through the years other groups, including Boy Scouts, John Bowne High School, Yale University, LTV Squad, New York World, and CUNY Macaulay Honors College have worked for the betterment of the park’s Forever Wild areas and to document its life and needs. We give thanks also to the NYC Urban Park Rangers, who provided the first public canoeing in Willow Lake and will certainly continue to be a leading presence! We hope that HarborLAB can partner with these organizations, bringing the added joy and access of a canoe fleet! HarborLAB also has sit-on-top kayaks, but canoes are a safer (drier) bet until we have water quality data.

So what’s it like to paddle Willow Lake with HarborLAB? It’s an amazing New York City experience! 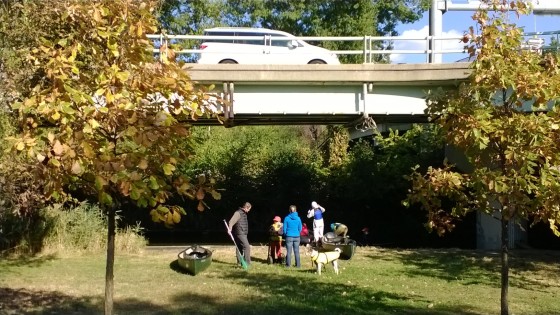 What are those strange people up to under the Van Wyck Expressway traffic? Canoeing, of course! 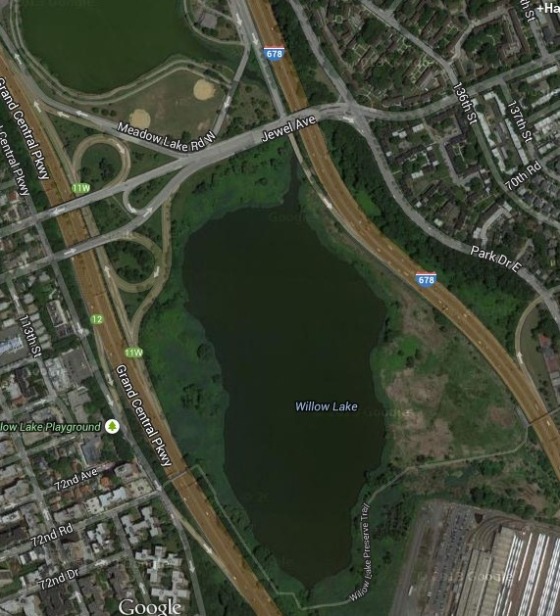 We’re under the Van Wyck Expressway (I-678), just north of Jewel Avenue, across from the park’s Ballfield #13. 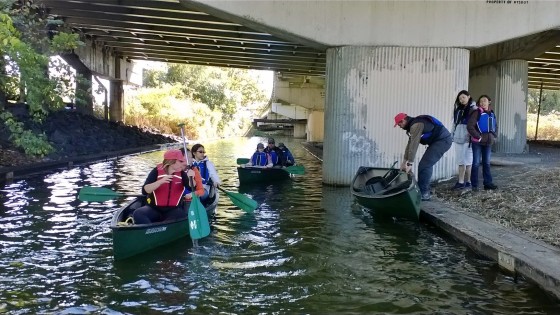 HarborLAB’s “secret launch” to Willow Lake. You start in the shade of a Robert Moses cave that thrums and thunders with Smart Cars and 18-wheelers above. Your canoe awaits in a small canal that links Willow Lake to Meadow Lake.

Is it the Bayou? Nope. Our little canal gives way to a creek, which is thrown wide open at Willow Lake.

Paddling to Oz? The Observatory Towers, New York Pavillion, and Unisphere of the 1964 World’s Fair glimmer in the background. 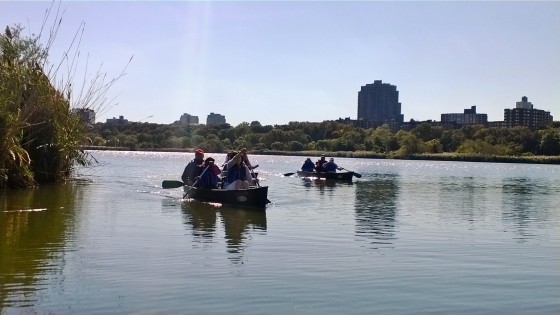 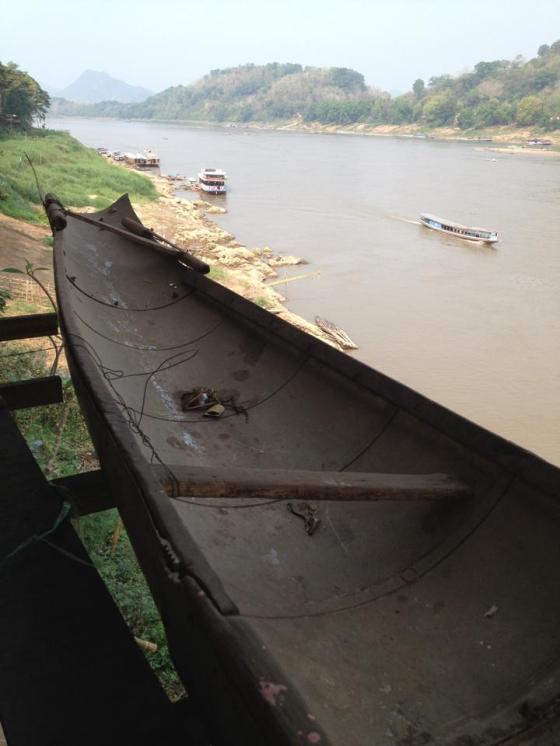 In Southeast Asia many bombs and bomber fuel tanks from the war decades ago have been converted into other uses, including boats. Photo by Carter Emmart.

Carter Emmart leads Grand Tours of the Universe as Director of Astrovisualizarion at the American Museum of Natural History, but spends much of his private time in one of his favorite places on Earth, Southeast Asia. It’s in Laos that he recently photographed an example of one of the most remarkable boat types in the world. At first glance it looks like yet another dugout canoe, a tree felled to ferry fruits to market or delicately balanced bicyclists across slow and silty rivers. But no, this is a cluster bomb case or jettisoned bomber fuel tank rebirthed in peace.

As Carter writes, “In Luang Prabang, Laos, the Royal City on the Mekong, now a UNESCO World Heritage center, there are many bomb casings and spent fuel tanks which were dropped by planes during the war. Fortunately this place was protected from the bombing, but a huge air field northeast of town (where one flies in) was the center of a lot of activity during the war in the ’60s until ’75, when the Communists finally took over. We saw bomb or fuel tank boats up the Ou River five years ago, but didn’t get a picture.”

Other travelers to Laos have reported seeing bomb casings and other war hardware repurposed with minimal modification as hut stilts, planters, grain cannisters, small cisterns, mugs, buckets, and other peaceful implements. Carter saw a bomb tail used as a potted plant holder in a Buddhist cave shrine at Mount Phousi, Luang Prabang, Laos. One must admire the resilience and innovativeness of a people who can co-exist with, and even utilize, these mementos of trauma. “Swords into ploughshares” or “bombs into boats,” it’s all the same. War is hell, peace is beauty. And peace is productive.

Pete Seeger might have loved seeing one of these canoes, which symbolically captures so much of his teaching, at the Clearwater Festival. HarborLAB provides the canoe and kayak program to the festival. Perhaps in a future year, HarborLAB will have the means to bring a “bomb boat” over? Or imagine a boat like this plying our nation’s waterways, paddled by people representing different local peace groups?

In the meantime, when someone asks you if you’ve got a “bombproof roll,” you might reply, “Maybe, but can you roll a bomb?”

Boats from bombs, Click the photo for the Away Go We blog.